A "Light" History of the Luminaria

With the holiday season upon us, more and more people are starting to bring out festive lights and decorations that are hung-up all-around people’s homes, in the streets, and in public spaces. One of the most popular lights that we see around the holiday season is the luminaria, a popular decorative light in the shape of a small paper lantern. 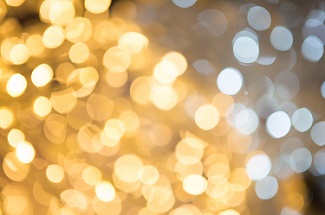 It’s traditionally a candle that was set in some sand and then covered with a paper bag. They’re often placed around as decorations or even carried by groups to celebrate both Christmas and the New Year. Lately, electric light bulbs have replaced the candles for luminarias in all but the most traditional and religious of Christmas celebrations. There are several useful advantages of using an electric luminaria, such as not using an open flame that could start a fire.

But where exactly did this tradition of the luminaria originate, and why do we still use them today?

The term “luminaria” was first used on December 3, 1590 in a diary entry by Gaspar Costano de Sosa. He mentioned that small bonfires were used by his cohorts to act as a guide back to his camp. From there, the term luminaria was used to describe traditional small bonfires that were typically used during Las Posadas, a nine day religious celebration that concludes on Christmas Eve. The word itself is a loanword from Spanish that became an English word in New Mexico.

The term is used differently depending on which part of New Mexico one comes from. For instance, the northern region of New Mexico refers to the decorations as farolitos, while the word luminaria is typically the most accepted and used term in the southern part of New Mexico. The word “farolitos” means “little lantern,” while “luminaria” denotes “festival light”.

During Christmas, the villages of northern New Mexico use farolitos to line their streets and paths, but they use luminaria as little bonfires as well. This naming distinction has caused long-running contention among New Mexicans, but the distinction is not made outside of the state and most people refer to them as luminaria today.

The most traditional luminaria was created by using a brown paper bag. It’s folded at the top, then filled with several cups of sand, and a votive candle was placed in the middle. It’s very easy to make and looks highly decorative, but the introduction of modern technology has changed the luminaria’s design to make the celebratory light brighter and more fun.

These days, luminaria take the shape of their traditional form, but instead of using a candle and paper to create the lantern, they’re made from modern components to create an electric luminaria. These are safer, shine brighter, and are very accessible, meaning they can be handled by small children without the risk of the kids hurting themselves. They can also come in various colors, and they’re easier to manage, which allows you to focus on the festivities that they’re meant to celebrate instead of worrying that something might catch on fire.

Walkup Electric encourages you to enjoy these wonderful decorative lights this holiday season!

Get the Professional Service that you need on YOUR time!